Robert Shaw: Man of Many Voices

"Since 1988, the year Robert Shaw took the Atlanta Symphony Orchestra and Chorus on a grand European tour, I have wanted to initiate a documentary about the incredible legacy of a man who touched countless lives through his passion for great music. I was a member of the ASO chorus and our first concert on that tour was in East Berlin, a city long divided by the hated Berlin Wall. The concert featured Beethoven’s 9th Symphony and was a life-changing event for most in attendance, musicians and audience alike. The audience experienced the profound impact of Beethoven’s powerful message - ‘All people will be brothers’ - just more than a year before the Berlin Wall would be torn down by the German people ..."

If you are in the choral and symphonic arts, the man celebrated in this film is a large part of the reason you love what you do.

Read about the film here ... go see it, if it happens to be screened near you.

Posted by Sally Kann at 2:00 PM No comments:

As one chorus member puts it ... The Arts ATL article had precious few discouraging words to say about the woman who tried her best to make the ASO a community band.

http://www.artsatl.com/breaking-news-virginia-hepner-stepping-ceo-woodruff-arts-center/
Posted by Sally Kann at 2:18 PM No comments:

http://www.artsatl.com/breaking-news-aso-completes-25-million-campaign-musicians-years-early/
Posted by Sally Kann at 2:27 PM No comments:

Mr. Spano Talks About the ASO ... and about music in general.

The Atlanta Business Chronicle, as you may recall, was a big supporter of the ASO during the 'troubles' in 2014... with several reporters publishing probing pieces about Atlanta's major world class symphony orchestra being 'good for business'.

Mr. Spano's wonderful interview with ABC's, Phil Hudson, from April of this year.  Mr.. Spano talks about his role as a conductor ...

In 2008, the Berlin Philharmonic Orchestra began its Digital Concert Hall, enabling music lovers from around the globe to see and hear BPO concerts -- streamed live, or on demand -- through a subscription or single ticket.  Last year, the Digital Concert Hall also began streaming archival films, some produced 50 years ago, and feature von Karajan at the height of his powers.

For a limited time, you can experience the BPO's Digital Concert Hall free!

These concerts at the Philharmonie, under the baton of Mr. Runnicles, form an important part of our choral universe.  That they happened at all was something of a cosmos-alignment: when he was first tapped as a guest conductor of the Philharmoniker in 2003, Mr. Runnicles asked if he could bring the chorus with him.  We joined him there, fortified with encouragement from ASO management, diligent choral preparation by Norman, detailed planning by the choral administrator, generous private and corporate funding, and unwavering pride and support from our orchestra at home. The 'amateur chorus from Atlanta' was subsequently invited back to Berlin on two more occasions, to perform sell-out concerts in a European capital, whose citizens are best known for the high artistic standard they demand in their premier concert hall. We did not disappoint.

I am happy and proud that one of our historic performances lives on through the miracle of live-streaming.  Please fill out the survey, and use your voucher to access our 2009 performance of Ein Deutsches Requiem through the Digital Concert Hall archive ... with the help of the latest technology, you can experience it for the first time, or relive it, like I did.

Masters In This Hall

It was a coherent vision which began this organization 70 years ago ... and guided its evolution into the world-class orchestra that it is today.  70 years of distinctive, live music-making from some of the finest orchestral masters are exciting to celebrate.

However, I still have a lingering fear, the same one which pervaded the lockout weeks, which still occasionally comes upon me:  the fear that the orchestra is doomed to be trapped in a cycle of having to justify its existence every couple of years, with events and arguments eerily echoing themselves.  The fear that a few years from now, someone -- perhaps not even connected with recent events -- will take a look at a balance sheet and cry out that 'something must be done!' about the orchestra because 'OMG! -- There's a deficit!'  And there we go again ...

Why did the lockout happen again in 2014?  How forgone is that conclusion for the next round of negotiations?  Is it possible that two groups who are historically on opposite sides of the negotiating table -- management and players -- can set aside entrenched modes of behavior and expression in order to move forward?

Breaking old habits is hard.  There is a saying which, when accompanied by the Gallic shrug, expresses an entirely French blend of cynicism and resignation: Plus ça change, plus c'est la même chose ... 'The more things change, the more they stay the same.'  Like that second lockout in 2014 ... it was a forgone conclusion, quite frankly ... two years prior, WAC went into siege mode and stayed there. Where are they now?

We need to explore issues which affect ASO's future, and the future of classical symphonic arts in general, by asking more questions.

Let's assume that the collective 'we' did learn something from only two horrific experiences.  Let's assume that four years from now, a 'transformation' has taken place:  in that time, players and player advocacy groups have built bridges between the orchestra leadership, staff, board members, donors, the community of audiences, and fellow WAC divisions to allow smooth, meaningful communication and mutual support.  Audiences are up.  Money is being raised; debts are being paid down.  Players have taken a measure of control over their destiny, even to helping choose board members and leadership.  And as proof of the environment of trust, carefully nurtured, all parties are working together in a shared artistic mission.  They did it in San Francisco; we can do it here.

The ASO's future depends on our accepting new genres of thought, if you will, opening our minds to the reality that in breaking old destructive patterns, we can actually change a predicted outcome.

When the future generation celebrates ASO's 100th birthday, our combined efforts today will account for the number of candles on the cake.

Eddie's Attic Celebrates The End of the Lockout! 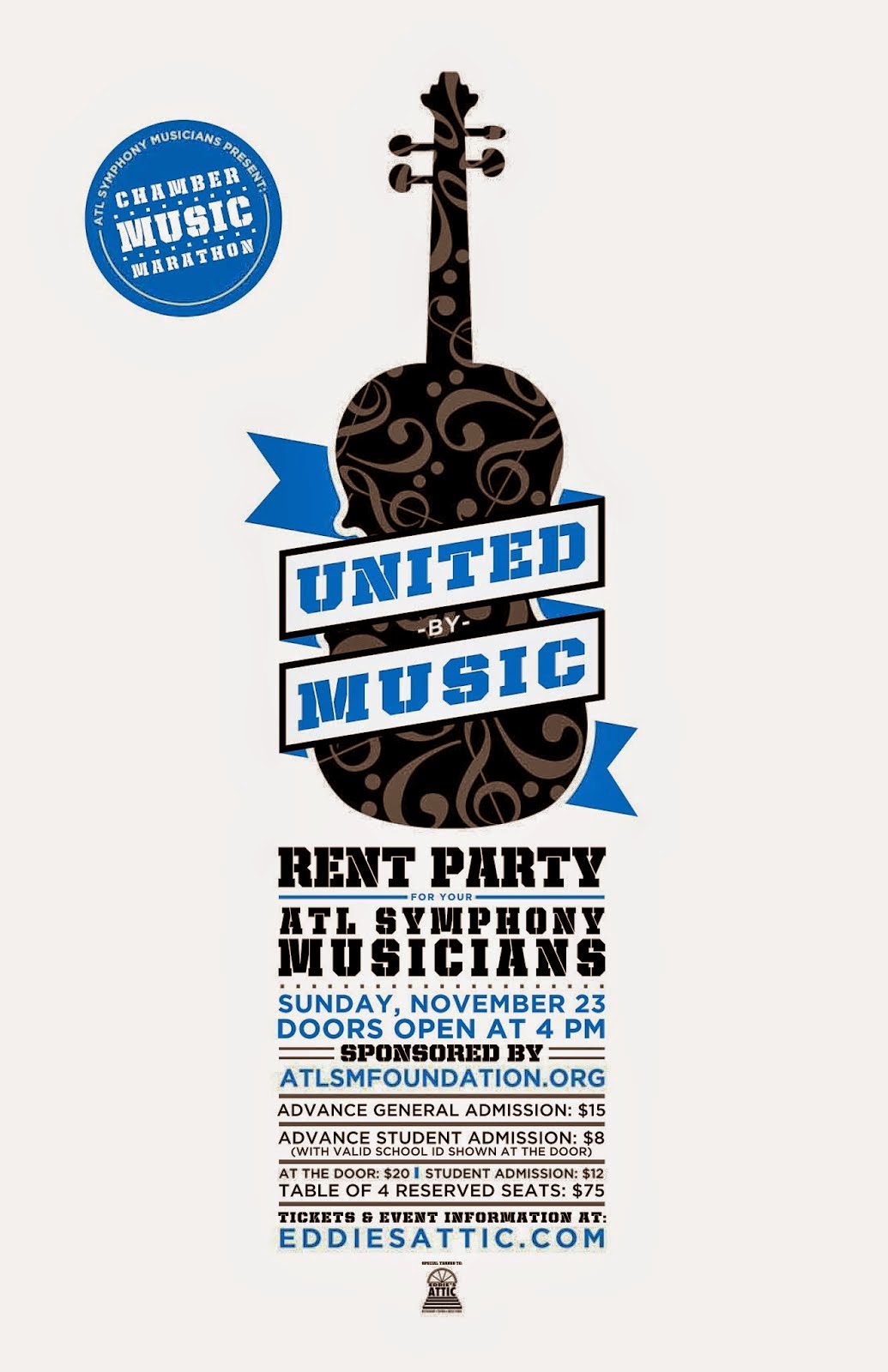 It's time to show your appreciation for the ASO's triumphant return to Symphony Hall! And the 10th Annual Chamber Music Marathon at Eddie's Attic is the place!

All of us who have attended the musicians' community concerts during the lockout know first hand that the ASO is more than just a collection of symphony orchestra performers. These are highly skilled players, masters of the symphonic form, who also happen to be passionate about all forms of classical music ... and especially chamber music.  Because the players are deeply invested in the future of classical music in Atlanta, they are constantly searching for new and exciting ways to promote and share their love of chamber music in unexpected places ... including very cool clubs like Eddie's Attic.

The Chamber Music Marathon at Eddie's Attic is a popular tradition ... mainly because it bridges the distance between stage and the audience.  You'll hear virtuoso playing, you'll interact with the players, and best of all, get to know each player's artistry.  This is a unique, personal experience you cannot have in Symphony Hall. 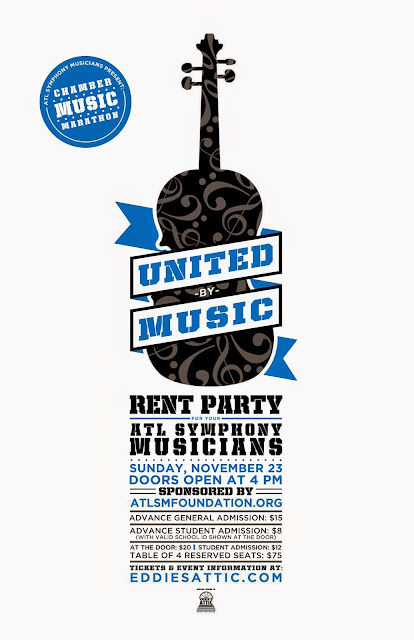 Eddie's Attic is a superior 'listening' club, with excellent acoustics ... and is historically known as the place where Live Music Matters!  They also have a great bar, restaurant service, and a terrific wait staff.  And what live concert would be complete without an adult beverage, a dynamite burger and a chance to pour out your feelings about the lockout to a sympathetic crowd?

**** PLAYER UPDATE 11/22:
Tomorrow night will be an amazing party! Come meet your friends at Eddie's ... We're United by Music! That means the Lockout can't 'officially end' until we all drink a toast to its demise, stick a viking helmet on it, put it in a boat, set it on fire, and send it out to sea. Let's close the chapter on pillaging and looting ... and open a brand new book: The ASO Moves Forward!'